In these darkening days, it is surprising that more music isn’t being made that comes from, if not a politically motivated place, certainly a place which examines some of the problems weighing down modern society at large. But most music seems happy to offer saccharine pop highs or cliched rock banality as if that is some sort of solution. Against such a seeming indifferent backdrop Ignacio Pena has always stood out as an interesting focal point delivering not only great music but more importantly songs with poignant lyrics and insightful overall messages. 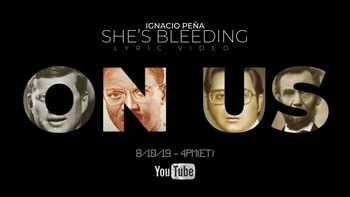 But the key difference between him and any number of street corner, wannabe rabble rousers rallying against current events or political figures is that Pena is more interested in looking at the root of the problems, to dig deep into history, to examine the hidden hands that have driven decisions, the powers behind the thrones and the uninvited guests. There is a much repeated saying that, “Those who cannot learn from history are doomed to repeat it,” and that seems very much to be Ignacio Pena’s motto. And what better way to deliver such complex and often controversial history lessons than wrap up in some fantastic music.
She’s Bleeding is a slight change of pace, a step down from his bigger, more anthemic sound, but no less powerful for its deft use of understatement and restraint. Like all of the tracks to be found on the album Songs For The Fall of An Empire it matches precise musicianship with deep meaning, paints great sonic pictures and writes deep and meaningful mini-essays. If you just want a great song to listen to then fine, it does the job admirably. If you want to ponder the lyrics and explore deeper social and political themes, it offers that too. Both are valid ways to approach music but it is great when one artist is able to splice both approaches seamlessly in their music.