Glom’s intrepid debut studio album, Bond, opens with the subtle bellow of “Tell Me Who to Be,” which pendulously rises from asunder and overtakes our speakers with a monolithic swing inside of its first forty seconds. Elegant vocal harmonies adorn the colorful riffing, but their textures aren’t nearly as provocative as those in the drumbeat shadowing their every lyrical emission. Sharp synths close out this track and pave the way for a kaleidoscopic follow-up in “4:1,” one of the most emotive songs in the first half of Bond, and by the time we reach the halfway point of this swanky alt-pop ballad, trying to evade the reach of Glom’s hypnotic melodicism is next to futile; it’s just too big a force to be reckoned with. 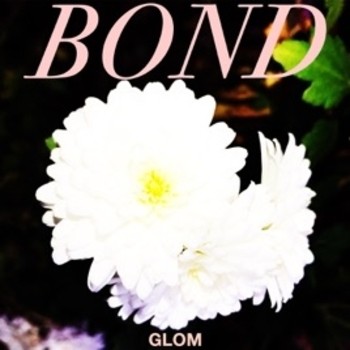 “My Red Spine” spits an agile groove in our direction as we progress deeper into the guts of this LP, but next to the charming “Stuck,” this track isn’t nearly as affective, nor as unashamedly hooky. “Stuck” continues the balladic tone of “4:1” but welcomes an additional layer of guitars into the grander scheme of things, making every harmonious verse in the song sting with an electricity that has been unbearably absent from alternative rock in the last few years. We slip into the middle portion of Bond with the glossy “Walking,” one of the record’s more relaxed songs, but the energy in the band’s play isn’t diminishing in the least at this juncture of the tracklist; actually, it’s here where Glom start to sound like legitimate rock stars instead of wide-eyed greenhorns.

Acoustic guitars rarely deliver the kind of wallop that they do in “Bad Year,” but as anyone who is familiar with this group’s work is well aware of by now, there’s nothing typical about Glom’s defiantly indie stylization. We segue directly into the slow-burning groove tune “Afraid of the Rain” as though the two tracks were always destined to be heard in this successive order, but in “World Class Poetry,” the band takes a step away from the even-trajectory of the first seven songs on Bond in favor of embracing an experimental mashup that, although starkly different from the other work here, sounds really organic and natural from the start. These players never show any hesitance on their first album – ironically, I think that this is actually one of the more swaggering releases of any in the rock genre that you’re going to hear this month.
The poppy “Forlorn” gets our hearts racing one more time ahead of the lumbering conclusion to Bond, “Something Stupid and Dumb,” but for as conflicting as these two songs are on paper, they too spill into each other rather seamlessly. Coming in at just thirty minutes total, Glom’s debut LP is a short but sweet way of saying hello to a world that hasn’t seen very much originality among American rock n’ roll bands in the late 2010s, and if it’s but a sample of what they’ve got in store for fans and critics in future releases, then I cannot wait to hear what they develop in-studio next.