Following a brief but well-advised parental advisory in the self-explanatory “Rated M.A.,” Ronnue immediately launches into the funkafied “If We Stayed 2gether,” the first slab of rhythmic urban thunder that his new album Introduction 2 Retro-Funk has lined up for us. The groove-driven swing of this track is unbelievably catchy, and by the time the single “Be Your Freak” rises from the ashes of its predecessor, we’re already breaking a sweat courtesy of the adrenaline in the beats. “Be Your Freak” offers us a look at Ronnue’s sensitive side, but doesn’t diminish any of the moxie in his ferocious flow in favor of drawing our attention towards the delicious hook in the center of all the perfectly synchronized instrumental discord. 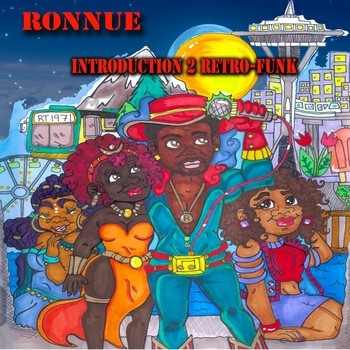 Figuz joins Ronnue for the incendiary “Why,” a track that dips us in more directions than an amusement park rollercoaster would before returning us to the steady sway of its dexterous bassline. It’s not as eyebrow-raising as the funky, balladic single “Something About U (The Retro-Funk Mix)” is, but let’s face it – not very many songs can be. Coming in at exactly four minutes and twenty seconds, “Something About U” is the unchallenged crown jewel of Introduction 2 Retro-Funk, and it captures the style of Ronnue’s music better than anything else he’s ever recorded has. It leaves a big impression, but in the follow-up track, “In Love,” Ronnue fills the void left behind with the most immersive instrumental backdrop of this entire record. He gently turns up the heat and allows for a clandestine harmony to lead us directly into a dreamlike beat that is hard to get out of your head once you’ve heard it for the first time.

Ronnue continues his artful seduction with “17 Days (The Hood Mix),” which along with its neighbor “I’m a Lesbian,” suffocates us with its sustaining bassline. “I’m a Lesbian” is as heavy as something off of a Melvins album, and I get the impression that it was intended to be as sonically blunt as it is in this current state. Everything about this record seems very deliberately designed by Ronnue as to get (and keep) us on the edge of our seats through the whole of the LP, and even when we’re listening to a privacy-violating exchange in the humorous “Bathroom vs Studio,” he makes us feel engaged and connected with his aesthetical premise.

“Do It (The Remix)” brings Roc Phizzle and Soultry into the mix for a cunning collaboration, but next to the 80’s club jam “You Tried Me (The Man’s Anthem),” its beat feels a little underwhelming. Ronnue brings us full-circle on Introduction 2 Retro-Funk in the blustery finale track “Give in 2 Me,” and if you’ve got a taste for uncorrupted funk and alternative R&B, it could qualify as the most irresistible song on the album. Critics and music journalists have been discussing the release of this record since January, and I can confirm that its opulent assortment of tracks were more than worth the wait. If there is one artist that hip-hop and pop fans need to be following this summer, it’s Ronnue, and after you hear his latest LP, I think you’re going to agree.