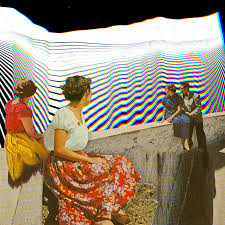 Caracol’s new single “Flooded Field” is one of the more engrossing singles I have heard so far in 2019. Taken from the Canadian based musical artist’s 2018 release Symbolism, Caracol created and filmed a music video for the track as well that complements it rather well. The confidence behind this package is apparent. Caracol entered the studio for this specific track, a collaboration with Detroit rap vocalist Illa J, certain of what she wanted to accomplish and sure she could capture the sound she heard in her head for this performance. “Flooded Field” is a single capable of affecting a wide swath of the listening public and making many new converts to her musical vision. This is no small accomplishment at the conclusion of the century’s second decade.

She juggles disparate electropop and reggae strands without the song ever sounding disjointed. The key for success in this area are transitions and Caracol carries off those moments with a seamlessness born from experience and invention. Another key is how Caracol never imitates anyone – she has her influences as all artists do in any medium, but she translated those influences through her own experiences and personality into musical results identifiably hers and no one else’s. “Flooded Field” has the right amount of imagery, all of it tied into one another, embedded within its lyrics to touch listeners and Caracol’s vocal gives that imagery additional layers it would otherwise lack committed to paper alone or in the hands of an inferior vocalist.

I enjoy the outright reggae part best. She has a light touch with the style that never portrays her as a musician straining for effect rather than letting the music flow out of her. The comfort she has with this sound is obvious and she communicates her love for the sound of reggae with understated joy filling every second of those passages. Illa J’s lyric and guest vocal are attuned to Caracol’s own work rather than providing jarring, out of place self-indulgence. His affinity for the song allows him to bring an alternate point of view nonetheless threading tightly around Caracol’s own. His guest turn is brief, but impactful.

The video mentioned in the review’s first paragraph has the professional level of polish and attention to visual detail I expect from longtime performers. Caracol may not be a well known name outside the Great White North, but she has spared no monetary or personal expense in creating a video that bolsters the profile of an already first rate single. I am a fan of how the video uses color – there is a dramatic and painter-like manner in the video’s contrasting color schemes. The moodier electropop sections are accompanied by darker and stylish visuals while the reggae supported portions of the footage are awash with vibrant hues and palpable playfulness.

“Flooded Field”, as I said earlier, is a potent single and likely one of the best songs included on her most recent album Symbolism. In a long career adorned with critical recognition, awards, and commercial success, Caracol has managed to create another gem amongst an array of existing jewels. “Flooded Field” has a hint of poetry and far outstrips the weaker, colorless paint by number efforts defining so much of modern pop.