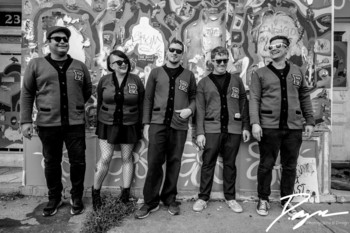 Thanks for your time, tell us, what is the meaning behind the band name!

Yeah so, as musicians we all have crummy day jobs. My crummy day job is being a substitute teacher. So when I was thinking of a band name I thought of a group of middle school children sitting around and being forced to listen to our strange brand of Gutter Pop. Total Buzzkill! The Radio Buzzkills name was born.

How did you all meet each other?

Bass Amp (drums) and I have known each other from the St.Louis Music Scene since we were 17 years old. Jenny, we recruited from the Chicago punk scene because she is a killer bass player and amazing vocalist. We were a three piece and we literally met Gene when he was blitzed at one of our shows, he asked to play second guitar and we were equally blitzed and said yes. As turns out he’s pretty good.

Montreal, Quebec without about. The punk fans are crazy fun. They have high standards for punk rock, and rightfully so! Punk Rock Night at The Melody Inn is always nuts. Indianapolis kids know how to party.

Craziest place you would like to play a show?

We’d all really like to play on a yacht for a Saudi Arabian prince where we would open for Taylor Swift and get paid one million dollars.

Dream venue you want to play?

As fans of early and mid 90’s punk rock we all want to play Gilman Street. When time travel becomes we’d like to open for the Ramones at CBGB or for Lincoln at the Gettysburg Adress.

What do the summer months have in store for the band?

We are currently recording a 7 inch split with The Black Russians for Outloud and Gutter Pop Records. Check out our social media stuff for more details! We’re prepping for a run of mid west shows with Haley and The Crushers this fall!

September 21 we are closing out the show with the Legendary Mr.T Experience at Punk the Burbs fest in Suburban Chicago!