“Cloud 9” is a single taken from The Violet Nines’ EP, which is also titled Cloud 9. The group also recently covered “Don’t You (Forget About Me),” Simple Minds’ huge hit from that John Hughes teen dramady The Breakfast Club, which may tell you even more about the band than this particular song does. Know this: There’s a strong 80s vibe running through The Violent Nines’ music.

Lead vocalist Veronica Fritsch sounds a bit like Aimee Mann, the vocalist for Til Tuesday’s “Voices Carry.” She has a pretty vocal tone and a sincere longing in her voice. “Cloud 9” also shares melodic characteristics with another 80s song The Blow Monkeys’ “Digging Your Scene.” 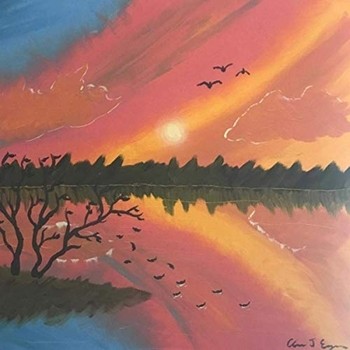 The song starts out with a semi-jazzy guitar groove, which sways more than swings. The percussion is sparse, and there are “do do do” backing vocals running through the beginning section of the tune. Fritsch then enters in and takes center stage. The song’s lyric sounds be about the longing for a lovers’ getaway. She admits she doesn’t know where she’s going; she just knows she needs to go away – with her lover.

The term ‘cloud nine’ is bit of a mystery. Some have speculated that, according to the International Cloud Atlas from 1896, ten separate kinds of clouds are described. The ninth one, or cloud nine, is characterized as cumulonimbus. This one soars all the way up to 10 km (or 6.2 miles), which is as high as a cloud can go.

With that said, though, one never gets the impression Fritsch is singing strictly about science. She sings, “Hold me close/And take my hand,” at one point. This implies their ‘get away’ may not be a geographic escape. Rather, this ‘getting away from everything’ might be much more insular than that. By getting closer together, physically, they’re actually getting away from everything else.

If cloud nine is the highest cloud of them all, perhaps Fritsch is singing about the way her baby makes her high. Could this be a continuation of what the Byrds sang about with “Eight Miles High”? Fritsch also sings, “Everything will be alright in a while.” This turn of phrase suggests that, not only are these two looking for somewhere to get away to, they’re also seeking a place to escape from. Fritsch is not specific, which is smart. That way, by not getting overly detailed, the song’s lyric will hold appeal to a much wider audience.

The song’s outro includes a bit of a spacey keyboard part. It’s one of the track’s 80s music earmarks. When Fritsch is singing, however, the backing instrumentation is simple and understated. Her voice is something special, and the producer was smart to put her singing so far up in the mix.

The Violet Nines are from Minneapolis, MN, and self-describe as “a vibrant band with alternative sounds influenced by funk, pop and rhythm & blues.” These words can also be used to describe Prince’s music, another Minnesota native. However – no offense to Prince—The Violet Nines aren’t nearly as weird as Prince. Rather, this is more of a straightforward pop act – at least based on this sole example – and not quite so funky.

However, as pop songs go, this is a pretty darn good one.