There’s an old Jethro Tull song, which includes the refrain, “Skating away, in the thin ice of a new day.” There’s something foreboding about discussing thin ice. It’s the realization that something bad can and (likely) will happen. With “Thin Ice,” unstable frozenness “is what we’re walking on.” Bad things just might happen. 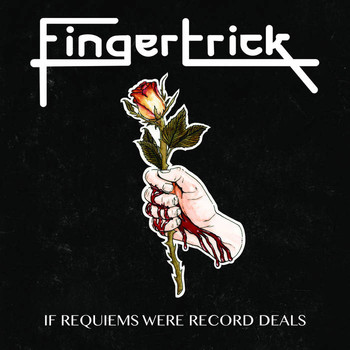 The track opens with an acoustic guitar part. Vocalist Chris Pietrangelo sings its lyric with urgency and sincerity. It builds into a midtempo rocker. We hear him navigating the dangerous terrain of a relationship as though he were walking among landmines. “It’s gonna take two steps from you/For every one from you I lose,” he reminds us. It’s a song from one romantic partner to another. Each relationship activity is measured by steps because any progress (or lack thereof) in a relationship is predicated on whether a couple moves in the right direction together or not.

“Thin Ice” is very much a pop song. Rock & roll guitar, bass and drums do ultimately enter the mix, but this song never gets too loud or overly aggressive. Pietrangelo’s singing is passionate, but he never exchanges the intimacy of his words for emotional enthusiasm. He clearly has one person, and one personal relationship, in mind.

Fingertrick is a group from Memphis, TN, which is influenced by a slew of classic rock acts. One can hear these inspirations running through “Thin Ice,” too. This is the kind of song you can imagine being played at a rock concert, after a few loud rockers have just been performed. It’s a quiet, thoughtful song.

One verse finds the singer bemoaning the coldness of the world, and how he feels himself sliding away. He’s skating away on the thin ice personally, just as he senses his relationship slip-sliding away.

The production on this recording is topnotch. It sounds radio-ready, and not at all indie lo-fi. Fingertrick faces relationship struggles head-on with this memorable song. Artistically, at least, the band is most assuredly on solid ground.