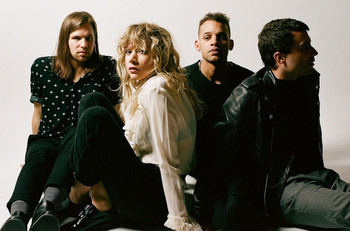 machineheart’s beguiling frontwoman and lyricist Stevie Scott reflects on the track, “‘Altar’ started as a very rudimentary, guttural response to inward despair. There was so much commotion going on in the world and I didn’t fully know how to process it. It was my birthday actually, so I remember it well. I started slapping on the guitar and sort of talk-singing through the verse. I’m so spongey when it comes to emotions and I just couldn’t hold in the measure of sadness that day. I do think it ended up having hope and triumph in the end and that’s very true to how I view the world. Even in deep tragedy, there is still beauty to be found.”

People Change was co-produced by Jim Abbiss (Arctic Monkeys, Adele) and recorded between Los Angeles, Seattle-area and Toronto. From quite introspection to lush soundscapes, the album explores how emotional dissonance can yield beauty.