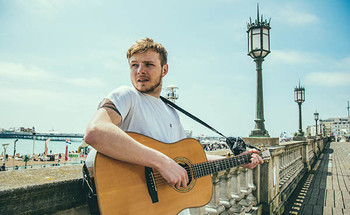 Already one of the most acclaimed young musicians on the Czech music scene, the super-talented Thom Artway third international release is taken from his upcoming sophomore album, ‘All I Know’, due for release this Spring. Throughout 2018 the young musician has toured all over Europe, which he concluded in the UK. Thom presents his new video for Can’t Wait, filmed in sunny Italy, just a few days after his concert at the renowned Dutch Eurosonic Festival. After winning two prestigious domestic Anděl Awards 2016, Artway is currently nominated again in The Best Solo Artist category.

In the Summer of 2018, Artway took off for several weeks to Italy to busk and shoot a music video for the track, Can’t Wait. He travelled from one Italian town to another and played on the streets. “The main location was the coast of Cinque Terre on the Italian Riviera, which is a group of five picturesque villages and it is really beautiful.” says Thom, adding: “This place has a great seaside atmosphere, people are friendly and it was fun to shoot here.” It was directed and filmed by the director, Ondřej Urbanec, who also did the post-production. The result is a video full of sun capturing the smell of Italian sea and countryside. Travelling around Italy, Thom came back to his musical beginnings busking around various European and world cities.