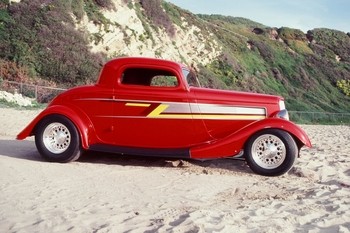 Cars have been tied in our culture for the greater portion of the last century. Ever since they made the horse and carriage obsolete, people across the world have been obsessed with cars and everything that has to do with them. As a result, the presence of these vehicles has soaked into the fabric of our art and entertainment.

Some musicians use their cars as their muse. Writing lyrics that highlight the best features of their car. Others use it as a metaphor to discuss a greater idea. Then there’s those who use the cars as a status symbol. Some of the greatest songs in the past 40 years have been about cars and driving cars.

Our obsession of cars has led to famous tunes and music videos that accompany them and sometimes helps us avoid online traffic school. As a result, we couldn’t help but put together a list of notable car music videos that couldn’t be ignored. These are the videos that stood out to us for a specific reason – whether good or bad.

Let’s look at everyone’s favorite rock decade: the 80’s. It’s home to loud bangers and louder hair and perhaps the answer to keeping your teen driver safer. There’s something regal about the classic models that emerged from this decade. Just like ZZ Top’s notorious “Eliminator Car” which is a fiery red 1933 Ford Coupe.

This vehicle is showcased throughout a few of ZZ Top’s music, such as Sharp Dressed Man, but has been showcased special in the song Gimme Your Lovin’. Some people think the song is about a person, but we all know it’s about the Coupe.

Aretha Franklin captured the essence of Detroit in her music video Freeway of Love. The video shows a montage of dancing and singing with close ups of instruments accompanied by shots of an 80’s assembly line manufacturing Ford Mustangs. Some videos will show the appealing aesthetics of a car, but Franklin shows the behind the scenes construction of these motorized beauties.

Just when you thought the music video was centered around the Ford’s most notable car, you’re slapped with a surprise visit from a Cadillac Cimarron. This 4-door sedan is known as an “entry-level” luxury vehicle and was highlighted amongst a literal line of Ford Mustangs.

You can’t watch a 90’s movie or listen to a road trip playlist without the one song that represents an entire decade. That song is Life is Highway from Tom Cochran. As a true 90’s anthem, this song features a Chevrolet Impala Super Sport along with Cochran’s wailing voice telling you he’s going to ride life all night long.

Another notable song that emerged out of the 90’s was Ice Cube’s most well-known song, It Was A Good Day. This music video features Ice Cube cruising around the city in his Chevrolet Impala. Yes, there was an Impala phase in the 90’s that bled into the early 2000’s. The song features the scenic shots of the city, people’s day-to-day lives, and one relaxing cruise in a car.

In the 2000’s the Gorillaz released a song called Stylo. This music video features a worn and torn Chevrolet Camaro from 1969 riddled with bullet holes. The viewer can piece together where the bullet holes came from during the car chase scene.

This video shows off the Camaro’s capabilities in an engaging and fast paced way. Known to be pure automotive muscle, the Camaro is a car beast that can take a punch. As evident from the car chase through a Californian desert. In the end, the vehicle becomes submerged under water which is the perfect metaphor for our hearts sinking at the sight.

Finally, we couldn’t leave off the best music video out of the 2000’s. Closing out the list of the most notable music videos about cars is the Mistah F.A.B’s song, Ghost Ride It. Featured in this video is an array of vehicles, but the most eye catching is the decked out, modified school bus.

Ghost riding was a craze that became popularized when the video was released. This craze required you to ride your car like a surfboard as it cruised down the road at a low speed. Ghost riding gets its name from riding your car while nobody is behind the wheel, yet the car is still in motion. If you’re unsure about the procedure, the instructions are literally in the song.