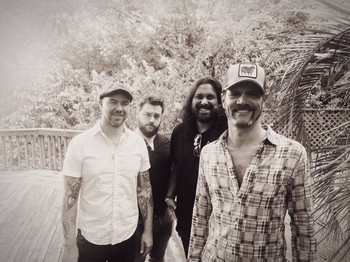 With a violent thrust of drumsticks and a myriad of colorful guitars to lead the way, The American Revival waste no time dazzling us with countrified sonic wonderment in their new single “Whiskey Kisses.” A brittle set of keys dance in the foreground as the melody slowly takes shape before our ears, coming together one refined note at a time before suddenly occupying every last bit of space inside a pair of stereo speakers. Singer Brandon Callies starts to croon, telling us of an old photograph that he can’t help but unearth from under his bed every now and again if for no other reason than to remember how simple life once was. He describes in imagistic detail the torture of knowing that this storied life is now gone, and before we have the chance to offer him a shoulder to lean on he breaks away from the groove and lays into the chorus with everything he’s got.

“Your sweet whiskey kisses / That’s what I’ve been missing” Callies declares, with the full force of his band behind him. The harmony wraps around us tightly, but it doesn’t quite suffocate us. All of the might in the bassline is cushioned by the smoky vocal, which itself is propelled to unreal heights as the mix flexes its strength on the second half of the chorus. Without warning the tempo mellows and we return to the level sway of the main verses, only this time we’re aware of the captivating highs that are looming just around the next musical turn that we’re careening into.

The piano keys brush up against the acoustic guitars, which are trying their best to keep their head above the floodwaters of romancing percussion and bitter vocalization around them. Callies stirs around the next stanza with an angst-ridden scowl that is all too relatable for those of us who know what it’s like to silently ache for someone that we’ll likely never have the chance to see again – let alone confess our most vulnerable truth to. The melody fluctuates and tethers itself to the words as if to admit that it’s lost without the commanding focus of Callies, who from the very commencement of this track shows us that he is the true spirit behind The American Revival’s charisma.

As “Whiskey Kisses” reaches its powerful end, the vocal harmonies swell to an almost overwhelming size and become engrained in the texture of the lead guitar. There aren’t any predictable indie stop/start dynamics to abrasively cut the song off once the band has made their point and the melody evaporates into the ethers from which it came; instead we’re left to fade into the void alongside The American Revival and the searing narrative that they’ve just delivered unto us. “Whiskey Kisses” is a very calculated song both musically and lyrically, and while it rebelliously refrains from self-absorbed territory it’s decidedly personal and driven by an intimate style of prose that plays more like a confessional diary entry than it does a bloated pop song. This is alternative country music at its finest, not to mention one heck of a way to tease The American Revival’s forthcoming debut album.