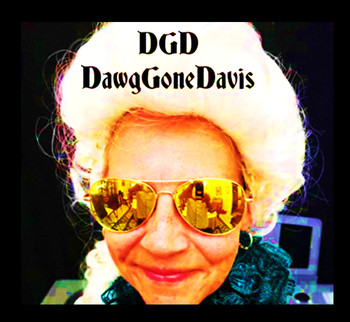 “Middle Aged Woman – Hip Hop Style” was my initial introduction to the music of Rebecca “Dawg’ Gone” Davis and it serves her well as the lead off track for her EP release In the Dawg‘ Pound. The Kansas City, Missouri based performer tackles the subject of someone her age attempting to perform in a hip hop style with a lot of charisma and unapologetic passion, but the humor in her lyrics is undeniable and never forced. Working with producer Helmutt Wolf, Davis leans heavily on electronic instruments like synthesizer, but the music here and elsewhere on the EP never sounds manufactured and the rhythm section gives the song a strong foundation. It’s fun to hear someone dismiss, with a smile, any ideas that her age and gender restricts her somehow from indulging her passion for a particular form. “Middle Aged Woman – Hip Hop Style” remains just as fun and involving as it was when I first heard it.

“Forever Music” has a sarcastic bent that isn’t quite as present in the opener and a dollop, at least, of dark humor to match. The percussion track hooks you in from the first and she gives her musical identity a further spin with the inclusion of some pensive saxophone accompanying her typical arrangement. The dark humor mentioned earlier doesn’t dominate the song – if anything, those moments further underline the core subject of Davis’ song – her love of music. I have no doubt it has been a sustaining and redemptive presence in her life. Running a little over three and a half minutes long, the song likewise illustrates the same focus she brings to the other songs as well. There are no needless frills, no wasted motion. She makes her statement and entertains listeners from the first. Also it’s worth mentioning aa the proceeds from the sale of this EP go directly to OPERATION BREAKTHROUGH – https://operationbreakthrough.org/

The music takes a slight turn with the song “Butt on Fiya”. It’s a tale of two songs, really – there are comedic moments galore in the song as Davis rhapsodizes about how appealing her butt is, but there’s also another subject here as she deals with the aftermath of surviving breast cancer with the sort of humor, I can only imagine, is essential when reflecting on such a struggle. There’s a surprising moodiness working its way into this tune – the arrangement has understated atmospherics punctuated by some particularly tense saxophone playing. It’s more evidence that, despite how funny this EP is, there’s much more going on here than just trying to make listeners laugh.

“Anthem Pandemonium” continues the EP’s wont for gripping percussion work and draws you in from the first beat. The music builds from there, never in a rushed fashion, and gradually incorporates more musical touches as it progresses. Davis’ vocals are as dramatic as ever without ever taxing listener’s patience and it is tied into the arrangement in such a way that both components complement each other well. In the Dawg’ Pound is a hip hop release like few others you’ll hear in 2018, or ever for that matter, and sets the stage for hopefully more to come from Dawg’ Gone Davis.

The music of Dawg’ Gone Davis has been heard all over the world due to the radio plugging services offered by Musik Radio Promotions. Learn more – HTTPS://musikandfilm.com