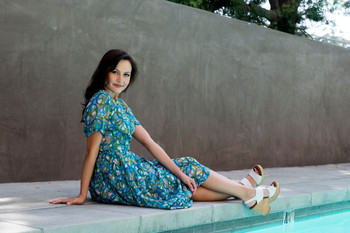 Monica Aben’s home studio is decorated with NASA posters; therefore, it’s only logical that her music should be dotted with space metaphors and astronomic imagery, littered throughout her melodies like stars.

Brand new single The Beginning of Things is no exception. A love song through and through, Aben sings with cosmic buoyancy about her relationship with her boyfriend and the moment they first kissed. The universe was right there on your lips – we kissed, and we got lost in it, she sings delicately in the pre-chorus, calling to mind Sarah Bareilles or Taylor Swift in her vulnerable lyrical stylings and sensible pop propensities.

Comparing the important moments in relationships to the timelessness of celestial bodies, “The Beginning of Things” might best be seen as an examination of the ever-evolving conditions in our lives that transform and cascade into violent dissonance where negative feelings are ready to overwhelm you, until you realize, perhaps quite suddenly, that everything you’ve gone through has finally led you to the perfect place, and that you actually wouldn’t change a single thing . Sung ardently over lush foundations of piano and sensible pop melodies, In Your Universe was recorded and engineered at Dockside Studios in Louisiana with Justin Tocket and Ben Alleman.