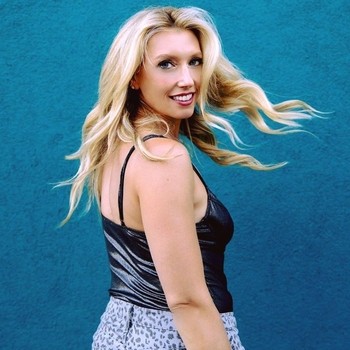 It isn’t always easy to remix a song that helped to define the persona of an artist and stay true to the spirit of the original, but in “Mr. Fix It (Rocky G Remix),” the framing of Brooke Josephson’s epic pop jam isn’t left in ruins as a result of the gilded renovations installed by producer Rocky G. “Mr. Fix It” does not center around one particular verse over another, but instead supports its chorus with a much sleeker and flowing structure that (as we learn here) was built to endure any experimental accents that could be applied to its melodies. Brooke Josephson remains the undisputed object of our affections in this track, but Rocky G’s presence is never in dispute. The synthesized tidal wave that drowns us in unsuspecting harmonies comes straight from the producer’s side of the glass, and we soon find that there isn’t a single studio weapon at her disposal that she didn’t use in the final mix. The hooks get a fresh polishing and actually shift a bit smoother here than they did before, and the drums are a particularly big draw in their own right, pulling us asunder and into the depths of Josephson’s emotional lyrics for an unforgettable sonic super ride.

Try as it might, the rhythm of “Mr. Fix It (Rocky G Remix)” isn’t as abrasive as the synthesized melodies are, and the percussion acts as the tight mediator between the two. The drumming balances everything in this song out and keeps the tempo from becoming so aggressive and reckless that we lose sight of Josephson’s incredible voice. In the mix the vocals are put right beside the engineered bluster of the synths, but they don’t compete for our attention. Everything in this song has a very specific place to sit and part to play, and thanks to the nimbly constructed drum patterns nothing ever becomes experimental to a fault. Josephson deserves a lot of credit for the original version of this song, but with Rocky G’s help she touches on a lot more ground in this incarnation, ultimately telling her most severe critics that there’s so much more to her identity that we’ve yet to even explore.

You don’t have to be a club kid in the traditional sense to fall hard for “Mr. Fix It (Rocky G Remix),” or the psychedelic-tinged music video made to promote its release. However, it should be said that listeners with a keen ear for intellectually stimulating audio that transcends genre barriers and puts bold melodies above everything else will likely find a solid hit in this single, which isn’t shy about going beyond where most artists in Brooke Josephson’s position would feel comfortable visiting sonically. There’s no inhibition to behold in this song, nor is there a cocky arrogance in the execution of its steamy harmonies. Josephson and Rocky G make an amazing duo, and this single is less about getting their individual brands into the mainstream conversation and more about expressing something unique and possible only through collaboration. They accomplished what they set out to with this song, and I look forward to possibly seeing what they decide to take on together next.