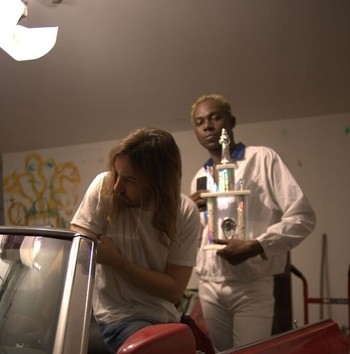 Widely acclaimed rapper and singer Theophilus London has revealed his brand new single, ‘Only You’, a slick rendition of the iconic 1984 original by Nigerian vocalist Steve Monite.

Bringing his genre-bending approach to the track, Theophilus draws from a range of styles, including soul-pop, and post-punk, to electro and contemporary R&B, citing influences that include Michael Jackson and Prince as well as Kraftwerk and The Smiths. Critically acclaimed, the Trinidadian-born American showcases his smooth delivery across the soulful production, which follows Giggs collab ‘Bebey’ – heavily supported across national radio.

With ‘Only You’ reproduced by Kevin Parker of New Zealand rock band Tame Impala, the duo recently debuted the track on Virgil Abloh’s televised show on Beats 1, along with forthcoming single ‘Whiplash’. The release follows Theophilus London’s solo mixtape ‘Nights B4 BeyBey’ and precedes the highly anticipated forthcoming drop of his new album.