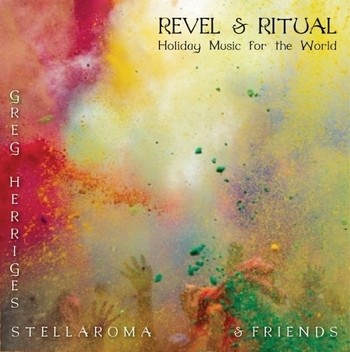 World music and culture are heard and seen throughout the entire globe daily…When people travel from one part of the world to the next, some of the memories that follow through the mind always trickle back down to the music that was experienced while traveling. When people hear something that intrigues them even for a moment, it stops them in their tracks to see just what they might be hearing and causes the reaction of processing the sound thus causing the memory to be made. And those memories are being made royally with Greg Herriges new album, “Revel & Ritual: Holiday Music for the World.”

Who is Greg Herriges? A native of Minneapolis, Minnesota, Greg Herriges is an Author, Bouzoukist, Composer, Guitarist, Multi-Instrumentalist, and Vocalist that has a unique style of his own in its entirety! Whether it is Indian or Medieval music, Greg Herriges seems to be able to confidently do it all! His new album, “Revel & Ritual: Holiday Music for the World,” is a refreshing instrumental album filled with magical imagination, wonder, and joy all in the form of historic breaths of life from each song! Digging in, Greg Herriges has a true eclectic mixture of sounds ranging from that of Manolis Chiotis and Giorgis Mitsakis come to mind with a truly unmistaken association. Greg Herriges has shared some successes with several film and television placements while has a list of printed materials that people all over the world have supported thus bringing him an international following.

The album, “Revel & Ritual: Holiday Music for the World,” consists of 9 solid songs from all over the world. Greg Herriges uses tons of The album starts off of the song, “Birjina Gaztetto Bat Zegoen,” the first thing that comes to mind is a night during the reign of King Arthur and his roundtable with the knights! A Basque Folk Song, it is also attributed to have meaning and reference toward the Angel Gabriel and his message…Imagine sitting in a place, full of wine, roasted vegetables, meats, loaves of bread, fruits, and cheeses with total laughter, dancing, and this sums up the holiday feeling in this beautifully scripted song. Between the usage of the guitar and light percussion, Greg Herriges does a great job of making the listener move back in time.

The next songs from the album include: “Garuda / Khelat Rang Holi, Sakura Sakura, and Sevivon Sov Sov Sov.” ‘Garuda / Khelat Rang Holi’ is that song to uplift your spirits. With the Motown sounding Xylophones that define the song at the very entrance, it is the amazing completely different sound that bursts on the scene afterward. A very Egyptian or Indian sounding singer enters the song giving it a festive desire in totality! Out of nowhere, I burst of energy is released causing movement and smiles to follow as the melodies sweep away everything that was once priority! GREAT STUFF! ‘Sakura Sakura’ is the magical spotlight from a personal side note…Imagine walking along a coast, early in the morning as the sun is rising…And look to the left as the light starts to magical glaze the water showcasing a tickling effect on the waves…And just stop and look—-THIS IS ‘Sakura Sakura.’ A very Japanese feeling amazing piece that spills wonder and desire to the ears. ‘Sakura Sakura,’ has an origin from Japan and even more beautiful is the fact that it involves the season of Cherry Blossoms. “Sevivon Sov Sov Sov’ comes right behind to make a splashing dip right back into the action…Jewish in origin, a beautiful holiday song attributed to Hanukkah…When first hearing this rendition, it is amazing of the ability to switch up the entire vibe of what has already taken place in the earlier renditions of classical worldwide Christmas favorites. Greg Herriges takes everyone away to a truly unique Jewish celebration and leaves no table unturned to unleash totality in the most perfect way.

The next portion of the album kicks off with the songs, ‘Ashura, Foom Foom Foom, Gong Xi Ni, and lastly, Shchedryk.’ Talk about truly being worldwide, in the next phases of the album by Greg Herriges, it shoots too many corners of the world. On the song, ‘Ashura,’ Ashura is known as the 10th Day in the Muharram and even more amazing is that it is also the first month in the Islamic Calendar…Associated with the Day of Atonement, after hearing ‘Ashura,’ it left me with the impression that I was on a journey in a faraway desert land, trying to make a voyage to pay homage to those that have come before me…Such a powerful moving song! If one is in the mood to drift away to Catalonia, you can do so with the song, ‘Foom Foom Foom.’ A Catalan Christmas Carol, in this rendition by Greg Herriges, you can actually the vibe of the Spanish South and touch the entire feeling of little children enjoying their Christmas Holiday. Such a bright and filling musical adaptation to a worldly and exciting place…Then drift away to a wonderful Chinese New Year with ‘Gong Xi Ni.’ To travel to a place that is mystical all in itself, you can do it easily and not leave your home yet when sitting back and closing your eyes, you can hear the extreme differences in the guitar playing, along with the speed of the song going from slower to faster all in itself. ‘Gong Xi Ni’ excites the listener with the ability to help you feel festive while also holding traditional Chinese culture all at the same time and this alone has been done effortlessly along the entire project! Lastly, we all end the world tour that we have heard from Greg Herriges with the Ukrainian New Year treat, ‘Shchedryk.’ ‘Shchedryk’ simply is exquisite in its entire adaptation…As soon as it comes on, Santa has to be on his way because he delivered Christmas in such a special way with this number. Beautifully crafted along with tastefully played, there is so much magical wonder in this song along with the way that the project ends on a bang! A personal FAVORITE is the least compliment that could be added as the entire project is so exciting to hear! World music at ITS BEST!

Very often projects come along that showcase a true meaning and with this one, an artist was able to tackle the entire world in one album and when entire is mentioned, it is meant! Greg Herriges has captured the true meaning of Christmas and captured amazing imaging through song as the ears get the ability to travel from culture to culture, one step at a time…It is a true pleasure to hear unique music but even more special to have a person enter a completely new way of showcasing why the world is a beautiful place—–THAT’S SOMETHING totally Different!!!! If you haven’t heard of the artist Greg Herriges or his new project, ‘Revel & Ritual: Holiday Music for the World,’ you are missing out on a true treat! This man needs to be heard! Coming highly recommended, please check him out as it will reward your ears!