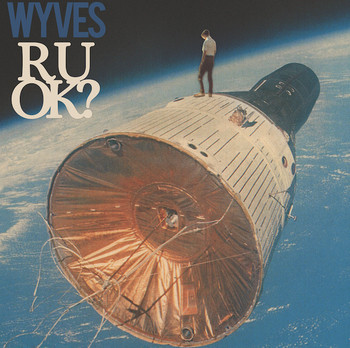 Drawing comparisons to modern rock throwbacks like Greta Van Fleet and The Struts, as well as boasting inspiration from iconic bands of yore like The Velvet Underground and The Rolling Stones, Wyves are primed to make major waves with their album R U OK? The Phoenix, Arizona based four piece are rapidly building a substantial reputation for their modern take on traditional rock thanks to exposure they’ve netted sharing stages and concert bills with the likes of Aerosmith, Guns ‘n’ Roses, and Gary Clark Jr., among others, and the rapturous critical response fueling their rise has assisted bringing their music to a wide audience. R U OK? exhibits the focus you hope for from a new act – there’s no sprawling epics or instrumental excess. Instead, these are compact and considered tunes never wasting listener’s time and brimming over with intelligence and attitude in equal measure.

The blues emerges as a powerful influence from the first. The gritty riff opening the album’s first cut “Princess Excess” soon settles into an inexorable groove largely propelled by Evan Knisely’s drumming, but this song isn’t any graduate of rock music’s bash and thud school. Instead, there’s loads of nuance laced through the arrangement and they tailor each component of the performance to complement other elements of their sound. Lead singer and guitarist Corey Gloden stands out, as well, thanks to his emotive vocals.

The title song is much breezier fare, but the same instrumental weight pushing the envelope on the album opener is just as present here. It’s raucous, good natured fare sure to entertain modern audiences starved for a modern reinvention of rock music. Knisely’s drums are outstanding once again, but the band performs as an unit despite their obvious individual skills. Gloden and Nick Sterling’s guitar attack pairs up for some nice dueling in this track. The album’s presidentially inspired single “Mar-A-Lago” doesn’t browbeat listeners with issues, but rather depicts a personality type increasingly, painfully, familiar to anyone who follows the news. It has a winning chorus and some clever rhymes driving the lyrics along.

“Distractions” settles into its uptempo clip after an impressive rave up and turns its eye towards modern American life in a similar way to the preceding song. Once again, however, Wyves proves their songwriting is intelligent by never writing in such a way the track will sound dated in a year but, rather, takes a wider lyrical view that unfortunately has continuing and growing relevance in all our lives. Brenden McBride’s bass brings listeners into the album’s sixth track “My Gravity” and the brisk pace sounds organic and never unduly rushed. There’s a surprising amount of melodic uplift, as well, defining the cut making it one of the album’s gems.

The album finale “Leroy” slows things down to a more deliberate pace and throws some slide guitar into the mix for a first time. Wyves’ rhythm section of Knisely and McBride are the key factors in bringing the song off musically, but the vocal melody is equally compelling. For my money, Wyves deserves greater consideration than contemporaries like Greta Van Fleet as being among the leaders of a new generation of rock musicians because they are clearly committed to bringing their individual voices to the forefront rather than paying tribute to the past and R U OK? provides ample evidence for that.