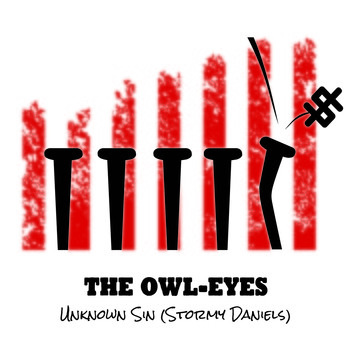 Do you know how St. Paul, Minnesota originally got its name? Here’s how…In 1841, the area that would be known as Saint Paul was named by such by Father Lucian Galtier, a French Priest wanting to honor The Apostle Paul. Today, St. Paul has several main attractions but the main one that is making a real splash is coming from the St. Paul-based band, The Owl-Eyes and the new single that is making several waves are called ‘Unknown Sin (Stormy Daniels).’

Who are The Owl-Eyes? By the description of the name, if someone pays attention to an Owl, what an owl does is a lot of sitting and watching so there is an amazing hint: They Watch and A LOT! At first listen, The Owl-Eyes have a really cool alternative-based rock vibe. A combination of Blink 182, The Foo Fighters, Green Day, and tons of vintage rock leave The Owl-Eyes in their own stepping category! The Owl-Eyes consist of frontman, Ethan Teel, who covers MOST of the instrumentation and song creation in the band with his ability to play Guitar, Bass, Drums, as well as being the Lead Vocalist; and the lyricist and songwriter. Lastly, Zahk Peterson keeps the beat by playing the drums. The Owl-Eyes have found a creative way to lend a pen and voice in writing about some of the every changing world events that are happening with their own style and that’s GREAT STUFF!

From the title, one might be thinking what exactly does ‘Unknown Sin (Stormy Daniels) truly mean? It doesn’t take a rocket scientist to see the name and go directly back to the chaotic roller coaster ride of the waves of oceans from the constant scandals that plague the political section of the highest office of the United States of America: The office of the President of United States. Without turning to place a political opinion, the band The Owl-Eyes have leaned a voice to establish their own interpretation to what is going on to the highest heights and have given very worthy detailed descriptions of a musical time capsule in their adaptation of the song ‘Unknown Sin (Stormy Daniels).’ Living in times where people stand all the time for what they believe in, songs like these are hard to pull off as the climate in which humans live within changes on a daily basis. However, this band has been able to capture and cast their own opinion with a glimpse of the political situations that are shaping the American culture as we speak. The slamming guitars and the spot-on drums leave a very lockable creation and it all works!

Very rarely do you find a band willing to place it all on the line and speak about what’s going on! Folks from the 1960s did it every day when the Vietnam War was happening just like during the Civil Rights days so it is refreshing to hear someone brave enough to find a place in history by leaving their own thumbprint! It would be a very interesting moment to catch The Owl-Eyes live in a show as the mixture of their eclectic energy along with their full message is one that actually needs to be heard, TODAY! I recommend this band and think you should take a listen!