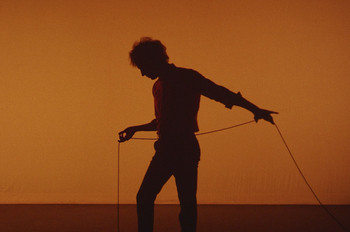 Albert Hammond, Jr. is bound to blow up the indie rock scene back to the prominence it saw in the early 2000s. As the rhythm guitarist of the Stokes, he has used his abundant knowledge on the music industry to produce and create his best work to date with his upcoming release, Francis Trouble. Like Alex Turner from the Arctic Monkeys, he pulls from the strengths of his most highly regarded influences while experimenting with the effects, drum beats, and arrangements along with changing up pacing and tempo. This rock icon uses his music as a mask as he goes “Under The Cover of Darkness” to spread the message of love that transcends time and space. Using music as moral law, he gives soul to the universe as well as beaming life to his vision.

Albert Hammond, Jr.’s latest music video for “Far Away Truths” gives us an insight to his awakened vulnerability. The video is set behind a white backdrop and the lights transition into a variety of boundless color. Directed by Justyna Hammond, Jr., he confidently swings his mic as his shadows side comes out in a haunting like manner. As his silhouette morphs and evolves, he casts light on a dark situation. He effortlessly outlines the tone of his album in a monotone manner of dissociation and compliance. His eyes and mind are open as light shines through to guide him to clarity and recovery as the video comes to a close.