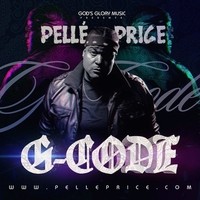 Pellé Price’s new single “G Code” continues blazing a trail for a Richmond, Virginia based singer/songwriter who confounds expectations. His stunning blend of gospel and hip hop with a distinctly commercial sound is quite unlike anything else you’ll hear in the indie world or otherwise thanks to its signature style, but retains recognizable pop song qualities making it accessible for casual and devoted listeners alike. He doesn’t shy away from incorporating a faith-based message in his music, but the lyrics alone avoid any dogmatic brow-beating and the musical treatment elevates his sentiments to a near joyous level. There is a light instructive element in the song, but its counsel offered with affection.

He deserves props, as well, for the intricate vocal arrangement. There is a strong strand of hip hop running through Price’s vocal performance and even a cursory listen suggests it would be a challenge for all but the best to bring off. Price varies his delivery enough to lend a dramatic charge to the song that it might have otherwise lacked and, in particular, the primary refrain of the track takes on even greater stature in Price’s capable hands. On the cusp of releasing his second studio recording under his own banner, “G Code” finds Price essentially re-inventing gospel for a new generation and giving it a charged modern quality likely to enjoy mass appeal in the genre.

The musical arrangement is secondary to his vocal performance, but never perfunctory. It’s largely driven by pre-programmed percussion and quicksilver synthesizer lines giving the tune some of its warm, slightly funky edge. The soulful polish of this recording illustrates why Price has steadily increased his artistic profile since first emerging on the indie music scene in 2004 and he’s reached a level now where his music has proven popular for television licensing deals for such networks as Discovery Channel and A&E as well as popular programming like The Kardashians. “G Code” is the likely first single from his forthcoming EP and, if so, we can be certain his new recording will advance his fortunes like nothing else before.