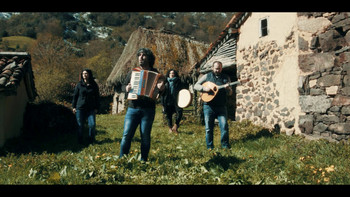 Although most folks think of Celtic music, in their mind they hear Irishm, Scottish music, there are really other regions in Europe with Celtic origins that influence their traditional music. Is the case of the Spanish northwest. From those lands are great musicians and bands from the Celtic scene such as Luar na Lubre, Carlos Nuñez or Hevia and from the green mountains of Asturias and León is the new-folk band “D’urria” who has released their first album titled “En Ca Pla” and recently they have presented a spectacular music video “La Lienda” by the young videographer Héctor Menéndez Aneiros. The song is sung in a local language, little known in the rest of Spain and the world, but very nice to listen to the nelody of the accordion, flute and the chords of traditional string instruments. But the music video is sufficiently expressive with the images and the dramatic narrative to understand the tragic story that tells the lyrics of the song. Cinematographic sequences that recreate with great fidelity the time of the Spanish Civil War, the prelude to the Second World War.