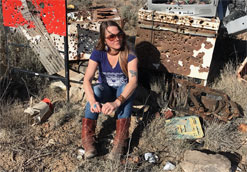 Originally from Princeton, Minnesota and now based in Minneapolis, Mary Bue is a singer that has been in the business for almost twenty years. Not only has she produced records for over a decade, she has generated real feelings in the hearts of fans through her conceptual videos and releases. She finds creativity in the dark aspects of life, creating a melancholy vibe without being too cynical. Her spirit shines through her songs and seeks a deeper level of consciousness to comprehend the underlying themes. She includes mental and emotional factors and channels those hardships into her persona, making her genuine, raw, and multifaceted.

A small-town girl with a city-centric mind, music has always been a part of Mary Bue’s life, acting like therapy but also a creative outlet. She grew up singing in church, and in high school, she took every chance to get involved by performing in choir and band. Mary started performing her own work at age seventeen and put out her first record in 2000. Her sound calls out elements of 90s grunge while incorporating electronic, indie, grim, and pop to produce timeless records. Apart from being a singer, she also owns a yoga studio where she actively teaches lessons about mindfulness. Over the course of her career, Mary Bue has put out six full albums including other projects and EPs. Her next album is sure to impress and build upon her complicated but intriguing story. The members of the band The Suburbs are planning on collaborating with her on bass and guitar, while also taking part in the production to take a more “piano pop” direction to revamp the sound of the 2000s.

Mary Bue’s recent music video for “The Things I Left In Duluth” holds a lot of humor as the writing process was influenced by a dare: her friends were all sitting at a bar and decided to challenge themselves to write a song with the lyrics, “the things I left in Duluth.” Unfortunately, her song became a self-fulfilled prophecy: Mary and her husband got divorced after “The Things I Left In Duluth” was produced. The video highlights the underlying dark themes while adding a nostalgic yet dreamy vision. Directed by Jon Hain, there is a sky backdrop throughout the video showcasing her dissociation- feeling like she is in the clouds. The video transitions between different shots of Mary performing, driving, and running around a field, then closes with her gazing into the sky as the background becomes all-encompassing, eventually suffocating her as she closes her eyes. She sings the vulgar lyrics, “the shit I left in Duluth” like a beautiful angel watching over us. Mary Bue has a clear vision of who she is and a mind that has breached the limits of her sense of self, making her evidently transcendent.