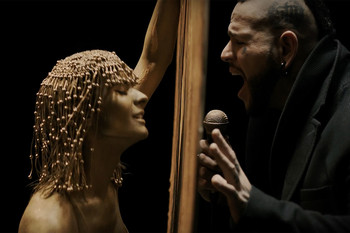 There are some songs that have an impact that lasts far longer than their initial release, and anyone who remembers the alternative rock world of the mid-1990s will tell you that The Cranberries’ “Zombie” is one of those songs. Yes, “Zombie” topped charts around the world and went Platinum in three countries (Australia, Germany, and Italy) and Gold in two (Austria and United Kingdom), but its largest impact is that the song’s message of protest and political unrest still rings true more than two decades later.

Los Angeles metal band Bad Wolves have yet to release an album (their debut LP Disobey is due out this May), but their members are no strangers to the world of rock and roll. John Boecklin (drums; formerly of Devildriver) and Tommy Vext (vocals; also of Divine Heresy and Snot) began bouncing around ideas for experimental, progressive metal songs in 2015; the group is now completed by guitarists Doc Coyle (formerly of God Forbig) and Chris Cain (Bury Your Dead), as well as bassist Kyle Konkiel (formerly of In This Moment). After releasing their singles “Learn to Live” and “Toast to the Ghost” last year, Bad Wolves got to work on their cover of “Zombie.” They sent the song to Cranberries singer Dolores O’Riordan, who described their version as “killer”; O’Riordan was slated to record vocals on Bad Wolves’ version of the track in January, but unfortunately she passed away that day. To the band’s surprise, Bad Wolves’ version of “Zombie” has since gone viral: it’s the number one rock song in nine countries and the number one metal song in thirteen countries, it reached number one on the iTunes main US chart and iTunes rock chart, and it has over three million streams between Spotify and Apple Music.

Directed by Wayne Isham and Ryan Ewing and produced by Dana Marshall at Prime Zero, Bad Wolves’ “Zombie” video is performance-driven, as Vext and co. are shown giving it their all. Vext’s chilling vocals add a somber, yet invigorating tone to the song, as he and his band mates are shown dressed all in black in an otherwise desolate black room. Of course, they pay homage to the original: the video features a girl covered in gold paint and wearing gold head-to-toe, just like how O’Riordan appears in the original. With over 17 million views on Youtube and 22 million on Facebook, the success of the “Zombie” video is undeniable, and Bad Wolves have decided to pay it forward, giving all proceeds from their cover to O’Riordan’s three children.