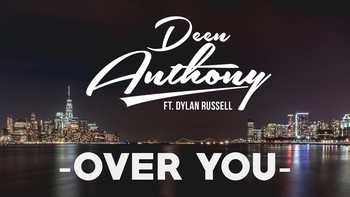 To an unfamiliar listener, the idea of combining alternative, dance music, and hip-hop may seem considerably ill advised. And unconventional indeed it is, but for New Jersey native Deen Anthony, the genres go hand-n-hand. He got his start in music by playing drums in bands, but first got in to DJ-ing by chance: a local rapper he’d worked with in his home studio asked him to come out and DJ for him. After refining and honing in on his sound in the EDM world, which brings live instruments to a pop-dance style, he found that DJ-ing was a compelling way to rise like a phoenix in his creative expression. Like his fellow West Essex High School graduates Cash Cash, Deen Anthony hopes to take influence from both of these worlds to create “my own custom alternative dance genre.”

Deen Anthony’s latest single “Over You” is a story many of us know all too well. Featuring vocalist Dylan Russell, the track was written about his ex-girlfriend: when the two broke up and she moved from his apartment in New Jersey back to New York City, he was reminded of her face and the time they spent together whenever he saw the city skyline. While Anthony does make a cameo in the video as a DJ in the club Mister East, his goal wasn’t to show his face but to express a real story and situation that happened. For all intent and purposes, the lead actor (Nick Matarazzo) was playing him!

END_OF_DOCUMENT_TOKEN_TO_BE_REPLACED

@skopemag news – wednesday – october 13, 2021 @ 7 pm est @skopemag HQ – http://smarturl.it/skope The Lumineers share video for “BIG SHOT,” fourth studio album ‘BRIGHTSIDE’ arrives on 1/14/22 “We are all big shots in our own story,” says The Lumineers singer-guitarist and co-founder Wesley Schultz, “and, now, we’ve all been humbled over the…

END_OF_DOCUMENT_TOKEN_TO_BE_REPLACED

East of San Francisco and Oakland, beyond Mount Diablo, right on the San Joaquin River, is Pittsburg, CA. It’s very much part of the Bay Area, but it’s sufficiently distinct from its Northern California brethren to have cultivated a personality of its own. Pittsburg is a straightforward and unpretentious place. It’s deeply and proudly Californian,…

END_OF_DOCUMENT_TOKEN_TO_BE_REPLACED

@skopemag news – wednesday – october 13, 2021 @ 5 pm est @skopemag HQ – http://smarturl.it/skope The Lumineers share video for “BIG SHOT,” fourth studio album ‘BRIGHTSIDE’ arrives on 1/14/22 “We are all big shots in our own story,” says The Lumineers singer-guitarist and co-founder Wesley Schultz, “and, now, we’ve all been humbled over the…