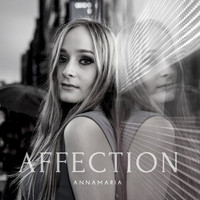 Annamaria comes from the NYC music scene to the world without hesitating to make an everlasting impression, with her single “Affection” proving her talent to be a force to reckon with. This artist is only seventeen years-old, but she is a singer who is bringing “R&B and Soul laden Pop with a distinctly powerful vocal edge” to the masses, and it’s a vibrant sound to compete with. She remains original even though influences by Tori Kelly, Justin Bieber, Michael Jackson, Demi Lovato and Christina Aguilera are clearly felt in this song. She meets them with a surprising ability for her age.

Emmy Award-winning producer/singer/songwriter and multi-instrumentalist Eren Cannata (son of Billy Joel saxophonist Richie Cannata), was brought in to work seamlessly with Annamaria to capture the essence of her truly talented songwriting and vocal stylings. Make no mistake about it, this is a well-crafted and produced single, which will culminate into a full-length release and subsequent touring which usually blows up from there. Her voice alone is something to marvel at, but pop and R&B lovers also have much here to musically enjoy. This track could easily ride high on the pop charts.

It begins with a subtle touch of the keys just before her voice makes a grand entrance and the rest is like butter on a cloud. It’s not a dance-heavy number, but it’s still suited for the clubs because it can still sway any dance floor. This places it somewhere intermediate between a slow and fast song. It’s a sublime treat the way her voice hypnotically controls the song, as if she’s simply in a conversation but it’s a song. There’s a magical prowess to that, a natural feel that comes from working with seasoned talent like Cannata. It plays like a combo that way, even though it is Annamaria’s songwriting to mostly credit.

The tones are soft and sweet, matched by some snappy beats and very a very bottom-end groove. It’s a multi-instrumental wonder of a backing track to sing over. The mood is mellow yet her voice so strong that it’s the mainly featured aspect to the song. From that standpoint she completely rules the song all by herself, but the utmost care was taken in who to work with to make it all sound so deep, even though it is a playful track. It never goes too far one way or the other, it maintains a steady pace and wins you over by the sheer sound of it without having to analyze too much. Pop perfection comes to mind.

As for Annamaria’s voice, it’s mature but retains her youthful sound around the edges. It’s rich and deep, jet high pitched and essentially all over the map with harmony. The lyrics to “Affection” are clean and radio-ready, as well as the overall energy and world class appeal of the single, which will go far in establishing her in the marketplace. This is just the beginning, but that is a good reason why she has a bright future. With an album coming, it’s only a matter of time before Annamaria is in the world spotlight, and this-single lights the way for all to hear. Keep an ear out for more.