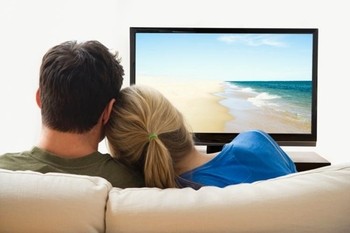 Entertainment options like Netflix are starting to produce some commanding original content, and their competitor networks are fighting to match or beat them. But with all of the action in this modern digital turf war, the role of the traditional television still reigns supreme in the American household. If you don’t think that TV still has a leading role in home entertainment, think again. Here are some reasons why people still love their television, and why this isn’t going to change anytime soon.

People Still Want to Tune in and Veg Out. We’ve all had the experience of flopping down on the couch and flipping on the TV with no plan for what we’re going to watch. Pre-programmed content is a tremendous value for this reason. Even as people can hand pick the movie or show they want online, this laborious approach to scratching the entertainment itch is sometimes not as satisfying as sitting back and letting a network do all of the work for you.

TV Is Better Than Ever. With shows like Game of Thrones ruling the entertainment landscape, TV is better than ever. Legacy programs like Mad Men and the Wire further prove that the past decade has been a golden age of television, with no signs of stopping yet. Dish network allows users to choose the content sources they want (HBO, Cinemax, etc.) without having to pay for the ones they don’t want. What’s more, the Dish Hopper lets users skip right through commercials in PrimeTime TV, making the traditional television experience that much more enjoyable.

TV Looks Good. The problem with watching video or television content on a computer is that it just doesn’t look as good as it does on TV. HD television is still crystal clear, and high quality televisions look better than at any other time in their history. It’s true that online media has adapted to the television, able to be played on televisions using devices like Apple TV or Chromecast. But these workarounds will never be as convenient as television as it was meant to be watched, delivered automatically through a cable or satellite without having to click around the internet looking for something good.

TV Is Still the King of Sports. If you love sports and want to see as many games as possible, you really must have a TV. The internet is still adapting to sporting events, but the chances of catching the game you must see are spotty at best. Different TV options offer a wealth of sporting channels and packages. You won’t have to miss a play from the comfort of your couch.

As you can see, traditional TV still has a major foothold in home media viewing. It simply does stuff that no other form can manage. While the internet continues to make sexy new content, it has nowhere near the development of more traditional kinds, and simply can’t perform in some key areas. Get what you want, but TV may still be your best bet for home viewing.