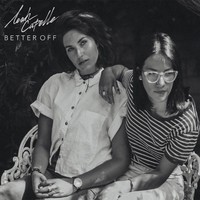 Better Off is a song about lost love and also about moving o. It’s about turning away from that negativity in order to allow more positive experiences into your life. This song has been done as a sort of team up between Leah Capelle and Hayley Brownell. The song is a very emotional one which has been acutely captured by the pair. The video that goes with the song and the photo also captures the feeling that they were going for.

The photo that goes with the Better Off single is a black and white picture of Leah Capelle and Hayley Brownell. They both are in relaxed postures sitting on a white garden bench that brings to mind tea-parties. The use of black and white in the photo instead of color adds a layer of sophistication. The lack of color also works to direct your eyes. Your attention is first drawn to Leah because she is wearing all white and is directly looking at the camera. This photo also has them seated close together making it look as though they have a good relationship. Overall the photo gives off the vibe that the song which corresponds with it will be emotional, which is entirely accurate.

Leah is from Chicago she started piano lessons at the age of 6 and began writing songs at the age of 8. Leah began to give live performances at the age of 13. Hayley Brownell is the drummer in Leah’s band. The two came together to make this song because they were both in a similar situation. They wanted to make a song about moving on from a negative relationship.

This song is entirely heartfelt. It’s a song about feeling unwanted and coping with that. The song grows from that sadness to the feeling of realization then relief. One line that begins to express these emotions is “I’m trying so hard and getting nothing in return.” This one way conversation is a sad reality in failed relationship attempts, however, moving on to something better is the healthy choice. The emotion that is being described in the song is something which is truly sad and makes for beautiful material for music. The video does a great job of portraying the feelings coming from the song lyrics, vocals, and instrumentals. The instrumentals from the acoustic guitar add to the sadness and when the playing becomes more rapid you can feel the emotions in the song shifting. Also the squeaks of the guitarist fingers slipping between notes works well with the mood. The fullness and softness of the guitar does great justice to the vocals.

Ultimately a song about hope, Better Off is an emotional ride to the listeners who are sharing in the journey of the performing pair. It’s a soft and easy to listen to song with a lot of emotions and great sounds. The simple music video that accompanies it works great with the piece and so does the photo that goes with the single. Better Off is a song that must be listened to, not only because it’s beautiful, but because it’s great message.