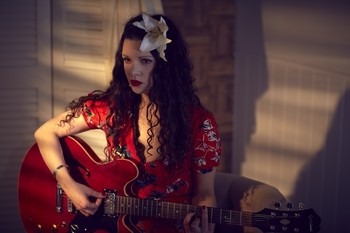 Natalie Bouloudis’s debut EP is the perfect document of her humbling creative powers at this point in time. Harbouring her own distinct sound, Dead Sea Scripts channels her experiences and meditations into a deeply enchanting record. By turns evoking sixties’ girl band nostalgia with the concise hook-driven songwriting of ‘Firebird’ or entertaining her darker side with the Bad Seed blues of ‘Whirlwind’, Dead Sea Scripts is a panoramic soundscape, loaded with pearls from her mythic lyricism and imagination. Alongside debut single ‘Burning Pier’ are five unheard tracks, with each song merging magical imagery and folk musicality with Natalie’s fundamentally relatable sentiments. ‘Romantic Bullshit Blues’ and ‘Firebird’ see her analysing the emotional tempest of heartbreak with forensic detachedness, and on the record’s spellbinding bookends ‘Raging Forcestress’ and ‘Float’ she reveals the disarming beauty and versatility in her singing voice. Above all, Dead Sea Scripts is the sound of an ambitious artist arriving fully formed and already at ease with her skills both musically and lyrically.