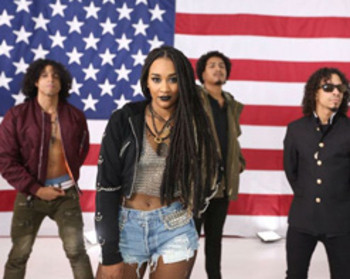 It’s been a frigthful time in America. No matter how apolitical you felt you were a few years ago, chances are, you’ve been tugged into the fight. It’s been country versus city, nativists against multiculturalists, the wealthy against the poor. Often it’s felt like the government is at war with its own people. Quantum Split, a fiery rock group from New York City, isn’t here to sugarcoat any of that. That isn’t their style. Instead, their debut music video is a vicious kick at a system that only seems to be working for the powerful – and one run by people who aren’t even bothering to disguise their prejudices anymore.

“America”, a ferocious debut single, is the new band’s first handshake with the nation. But here in the New York metro, Quantum Split has built a passionate following in a very short time. Their ascent has been driven by their sound: rough, direct and economical, uncompromising, funky when necessary, invariably soulful, and sometimes downright mesmerizing in its intensity. Soleil Laurent is a powerhouse vocalist and charismatic frontwoman, dexterous guitarist Adrian Read skillfully draws from hard rock, anthemic folk, and punk, drummer Anthony Anderson hits the skins with metal intensity, and bassist Ivan Hardy provides the steel framework that allows the songs to soar. Theirs is a project built to move crowds, and just last month, Quantum Split headlined at Irving Plaza – a remarkable achievement for any independent band, let alone one so new and fresh.