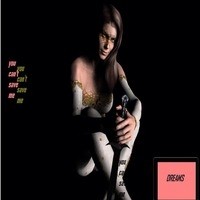 The songs of Dreams & Elma Reukema are the unique confluence of two generations and their distinctive approaches. Both inform the other and produce two tracks full of the passion and inspiration marking the best music. They further benefit from strong production values that render voice and instruments alike with vivid clarity. Both of the songs are tailor made for modern sensibilities insofar as they never pursue undue lengths to entertain the listener and, instead, exhibit a tasteful artistry far outstripping offerings from similar acts. There’s a cool confidence emanating from both songs that’s never forced and, instead, seduces listeners with its relaxed, loose vibe and the intense musicality of its presentation. Moreover, these songs come across as intensely personal, but not in a way reminiscent of ripping off scars. They glide and percolate like the best music does and are sure to linger in the memory long after the final notes fade.

Gentle acoustic guitars and free-floating percussion open the song in a memorable fashion and set a mood. They pull back a little once Reukema’s voice enters, but they never fall away entirely and, instead, focus on complementing her vocal. The flourishes that come are every bit as understated as the vocal and the band especially excels with well-turned melodic changes that are unexpected, but nonetheless quite pleasing. The musical arrangement, likewise, never extends itself any further than it needs to and even the instrumental breaks avoid self-indulgence capable of sinking the tune entirely. The seamlessness of the musical flow is uninterrupted throughout the entirety of the song and each new element builds on what has come before. The interplay between the guitars and drumming is particularly effective, but discreet bass contributions give the song a bit of added weight. The introduction, late in the track, of a mournful horn colors the song further. “You Can’t Save Me” has a similar vibe, but the presence of electric guitar is greater than in the first song and the presence of a second vocalist to play off against gives it a distinctly different impact.

The lyrics in both songs give Reukema much to work with. The first is a poetic meditation on the struggles to fall asleep at night for insomniac and her obviously sleepy vocals have tremendous lyrical beauty and ably embody the song’s theme. Her first class talents as a writer mean that she never wastes a single word; much like the arrangement, Reukema’s literate contributions through the text are lean and hone in on the song’s central points while never risking sideshows or extraneous material. Her vocal talents certainly do not sound like those of someone approaching or just past her fiftieth birthday. Instead, she sings with the grace and control of an experienced singer, but the texture of her voice sounds eternally youthful and untouched by the vagaries of time. She’s, likewise, an attentive singer who clearly listens to the music surrounding her and attempts to shape her vocals in a way benefitting the song most. “You Can’t Save Me” has a little lighter edge both musically and lyrically, but achieves a similar melancholy mood.