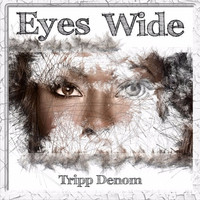 Tripp Demon, could be a namesake for about anybody, whether it’d be a band or an artist. In this case, it’ goes to an artist, within the rap, hip hop, category. Tripp Denom or his alter ego Uncle TD is what he likes to be called, either one works. His artistic talents would include rapping, singing, of course, as well as being a producer and a visual artist. His roots being in the Deep South and residing in the SF Bay Area, his music has taken inspiration and influence from many different areas, artists, producers, and then some. In short he has created a once in a lifetime sound.

But is that really the case, for this artist, well for his new song called “Eyes Wide”, it is your typical rap/hip hop song, similar to others out there like Drake, Usher, and even Nelly. Those are the similarities you get when you listen to the likes that is Tripp Denom. “Eyes Wide”, is one of those songs, that has a constant beat to it, it may run of 3 minutes or so, but the track itself, is a beat that keeps to itself. It finds itself being a track that can be stand able, and rather enjoyable at parts. Rap and hip hop, as well as r&b music, never catching my fancy at times. But some acts can make it work for me. For Tripp Denom’s style and beat for “Eyes Wide”, his style is there, and it is noticeable, but it can get drowned out by being put on repeat.

Don’t get me wrong here, the track is nice, listening to it the first few, not a couple but a few times, but after more than those few, the song just gets overplayed that it isn’t fun anymore. The lyrical context on the other hand, is dirty placed, it can be sexual at times, while other times, it discusses other matters, it’s hard to tell really. The song is as said, decent, sounds alright, but for one whose genre choice is hardly ever within the rap, hip hop r&b, category, this track made the cut, but by barely, if anything at that. Tripp Denom is a nice artist, has style and good beats with his music creativity but perhaps his style, could take another approach, of genre picking. Mixing it up a bit, sounding heavier if at that. Like doing a whole 360 degree effect, with his music, having it sound out and off as a metal, rock, track with his traditional styles, that are of the rap, hip hop category.

It’s just a thought, but going another direction with his music, may have him be able to expand his music choices, and perhaps sound just a bit more interesting. Like it’s been said, he has a decent song, sounding nice, and “Eyes Wide”, does this, but it could be so much better, with an improvement, of maybe changing up the styles of genre choices, just a tad.

Tripp Denom has got the talent of all ways of life, his musical abilities just needing to up keep, so it can continue to grow, and ever expand itself. By doing this, he will gladly be able to go places, with his music making skills, he has the mind, so put it to work, ever so further that it can be a better exposure and experience as a whole.