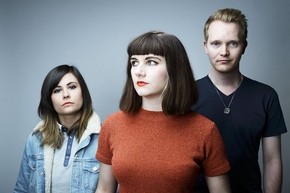 CURXES [kurs-iz] are Roberta Fidora, Macaulay Hopwood & Camille Phillips, a trio who meet at a mid-point between the coastal towns of Brighton and Portsmouth. From the piers, they come brandishing everything between synthesizers, biros and glockenspiels to create what has been described as “blitz-pop”.

Following on from their self-released singles “Valkyrie”, “Spectre” and “Further Still”, and being personally invited to remix CHVRCHES ‘Recover’, in 2013 they blew up the blogosphere through their DIY approach. In 2014, Curxes spent much of their time locked away in the studio recording their excellent debut album “Verxes” – set for release this year on 4th May on Strong Island Recordings. Before that though, April sees the unleashing of lead single “What You Want” – a huge sounding synth-pop meets acid house banger that screams anthem of the summer. With the release of their debut album and a UK tour on the horizon, Curxes look set to live up to the promise.