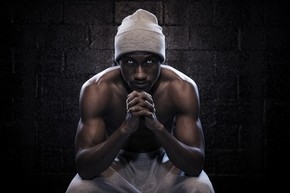 As a former acting extra for drama series Cold Case, Gilmore Girls, and That’s So Raven, one might expect a more sensitive heartfelt video to convey the struggle of finding himself from actor-turned-rapper Hopsin, but with a carefully deranged demonic approach, he exhibits an excellent exorcist-like performance for the video for “I Need Help” from his recently released album Knock Madness. As someone who takes a 360 ° approach to creating his art and visuals, Hopsin takes sincere care to create exactly what he wants. He says ” I look like an idiot to grab attention,” while spitting hard bars and introspectively divulging details about his personal demons. Through it all, Hopsin conveys that he’s just like us – not only is he just another human, struggling trying to find his place in society without losing his mind but he demonstrates that we can be our own worst enemy. He says ” The world makes me feel like I lost myself… if   you got a solution for me you should probably holler at your boy if you know somebody.” Characterizing himself as a schizo mashup with a demonic-zombie-psycho to tell the tale, Hopsin spills his guts in this highly illustrative plea.