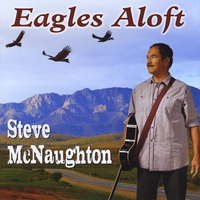 “Cross Country” is the first track from the new album by Steve McNaughton titled Eagles Aloft. Bluegrass is the first thing that comes to mind, Americana with roots in Country. The players are top notch and the production is perfect for jukeboxes in pubs all across the beltway.

“One More Shot” steps things up a notch, with an upbeat driving guitar and some gypsy-like fiddlin’. “Floating” has a Tom Petty type of feeling to it. The song is a story driven track with a soulful organ guiding the vocals. Even the Steve’s voice sounds like Mr. Petty at times throughout the song. The vocal harmonies are great and the guitar solo shows alot of restraint.

“Running Dream” is next up and is somewhat of a headscratcher. The song is done well but feels like it’s part of another album. “When You’ve Got It Good” sounds like a cross between The Eagles and Tom Petty. Americana is the best way to describe it. Pop for the golden age of radio.

“One Of These Nights” begins with a cool bass lines and is a cover by none other than The Eagles. Who would dare to cover such a classic song? Steve McNaughton not only has the talent to bring it up a notch but takes it well beyond karaoke status. Invoking falsettos and funky guitar, Steve’s voice is perfectly suited to this type of music.

“Sands Of Time” keeps things moving along with it’s country-esque pace. “What Would You Do If I Told You” has an interesting desert fueled reverb soaked guitar. The background slides add a nice touch to this multilayered song.

“Everybody Needs Love” kicks off with a female backing vocal singing “Sweet Love” and this song has a vintage feel to it. No, not the 80’s, not the 70’s… the progressive side of the early 60’s, it’s a little hippy sounding for my taste, but the backup vocals are pretty awesome, almost like The Chiffons. “Changing Lanes” jumps into some rythm and blues, I picture a band playing at a smoky club of yore [you know, back when bands played live instead of djs]

Next up is “Under The Sycamore”, a simple number that combines a number of genres, but I keep going back to Tom Petty and America. The hooks are catchy and smart.

The album ends with “The Navigator” has an 80’s pop sound, with Steve doing his best David Bowie. Overall, Eagles Aloft is an enjoyable album that captures alot of American music from numerous eras, yet keeps things fresh and interesting.