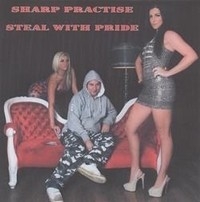 Formed in 1999, Sharp Practise is a rock band from the U.K. that has been around the global block, appearing on TV screens from Australia to Canada, along with providing music for such bigwig companies as Fila.

Viewing their studio as an instrument in its own right, Sharp Practise takes a rather scientific approach to recording. They strive to “develop material that has a mix of tempos, moods and sounds that ebb and flow over a number of songs.”

The band has brought this carefully produced mix of effects to their fifth album Steal With Pride.

The intro to the track “Jog On” launches with a nimble, bluesy guitar riff that I could listen to for five minutes straight. There is, perhaps, a small bit of optimism to take from the line: “I do the best with the life that I have.”

The musicianship is stellar on the track “Hard Heart,” but it’s tough to contend with the excitement of the previous track.

True to its title, the track “Keep It Dark” seems more brooding and introspective. Must say, I am a fan of the lyrics: “A pearl necklace ain’t no jewelry / Honeydripper, walk with me.”

By the way, I think ‘Honeydripper’ is a great name, would make a good title for a song or, hell, even a book. If only this type of stuff was in my Studies in Poetry class back in college. This sure beats the living shit out of Walt Whitman.

The track “Fine Line” has good dirty rock n’ roll guitar riffs. Again, we have another memorable line with tangible imagery: “You’re half undressed like a trash can hooker.”

There’s something playful and edgy about the track “Over to Caitlin’s.” Musically, this is my favorite piece so far. To indulge in a clichÃ©: the chorus makes me wanna sing along.

Just on the title alone, I’m a fan of the track “Wish My Girlfriend Was a Vampire.”

There’s something tender about the guitar work on “Maybe This Ain’t Right.”

‘Right’ or not, are you willing to ‘steal with pride’? Head to: https://soundcloud.com/sharp-practise/sets/steal-with-pride

Or bring your thieving souls to: http://www.cdbaby.com/Artist/SharpPractise

Or simply check out: http://www.sharppractise.com/