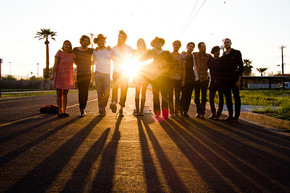 Edward Sharpe & The Magnetic Zeros have unveiled a soulful new live video for their single “Life Is Hard”. The band recorded the performance during a few days off in New York following their Europe tour this summer. Frontman Alex Ebert said of the process “It was a day of pure chaos, and it is truly amazing that we were able to get the performance we did – I think it may be, so far, the best we have played this song.”

The band had two major inspirations to create this video. Ebert explains “One was to, in a visually controlled, poignant, and real way, exhibit and record ourselves live – the performance is entirely live. The other was to respond to the pop music industry of the last 20 or more years, in which performance music videos are nearly always a suped-up, lip-synced karaoke, and a major contributor to that which is flimsy and feigned about pop music today.” The band and their fans have always felt the spirit of their music is best captured in live performances. This video gives a glimpse into that world.