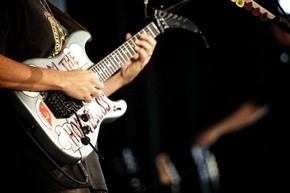 Whether you’re just beginning as a player, or if you have been playing for a while, guitar shredding is one of those techniques and approaches to playing that can take a while to master (at least if you want to get it right). It’s worth briefly covering the basics of guitar shredding, both in terms of what you need to focus on when starting, and some of the technical points that you can develop into your playing.

Guitar shredding is based around speed and a series of linked techniques – these include hammering on and hammering off strings, otherwise known as a legato style. You can also alternate picking, string skipping and tapping, as well as muting and sweep picking, which relies on working through ascending and descending arpeggios to create a smooth transition of notes within a chord.

In terms of getting used to the basic position of guitar shredding, you’ll need to get used to picking open handed, and having a resting finger in an anchor position to control the speed of your playing; this is usually your smallest finger, meaning that you’ll have to build up your strength. It’s important to be familiar with playing scales when you start, which mostly involves practicing pentatonic scales, open scales, and chromatic scales.

One of the best techniques to focus on when starting out is sweep picking – this involves forming a chord shape and picking notes up and down through scales – while requiring a lot of precision in terms of working out arpeggios, sweep picking can be begun by using three note runs that are varied into different shapes – becoming familiar with E minor and B minor chord positions is particularly important for this technique.

Finger tapping is also a key part of guitar shredding, and involves you moving your right hand onto your fret for tapping, whether than just using your left hand. You’ll need to ideally use your right hand middle finger to avoid muting strings, or the edge of your pick if you want a blunter sound – finger tapping is similar to legato styles of playing, in that a run of notes is created through hammering on and pulling off notes, but with three note runs enhanced through tapping. For more advanced playing, you can also experiment with using the whammy bar for scooping and dropping notes, and for pulling and pushing at just the right time.

Guitar shredding takes a long time to master, and you want to start off by focusing on your scales, triads, arpeggios, and ascending and descending runs. Other techniques, such as alternate picking and string skipping, take a while to get right, and it’s best to start off with sweep picking and finger tapping to get your technique down. When choosing the right guitar for shredding, it’s best to go for solid body electrics like Ibanezes and Gibsons.

Emily Steves has been playing guitar for several years, and likes to blog about the music industry. She’s a big fan of sites like  LickLibrary  for learning new riffs and picking up playing tips.