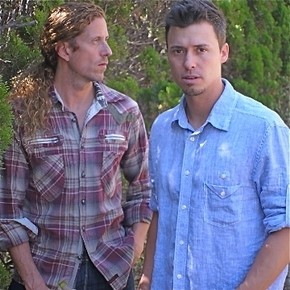 One doesn’t have to go very deep into the annals of Rock lore to find bands that could seemingly conjure magic, yet behind the scenes simply didn’t like one another. The infighting of Townsend versus Daltrey and David Crosby versus Neil Young are storied. But the opposite bandmate relationship can capture lightning in a bottle as well… just ask songwriters, TJ Runnels and Nick Midulla.

The guitar- and vocal-driven duo, 2 The Nines, met in 2006 when Nick was brought in to work on an EP of TJ’s and in that moment, the beginning of their collaboration began. Becoming tight friends after, the two began making music in their spare time, all the while working on other projects. “We would get together, always at the studio and just play,” Nick said. “And after he would leave I would take the tracks and continue to do work on them. Eventually we had these songs and decided to take the project to the another level.”

The real strength of the outfit is that both guys recognize their individual strengths and lean on them within the music making process. TJ brings and lends his vocals and ear for melody while the songs are hashed out by Nick and his studio experience. “I bring the melody and lyrical side of things, where Nick is the trained guitarist all different styles,” TJ said. “And all of the production work.” Typically, the collaboration begins with something as simple as a chord progression or “something TJ wants to do on guitar.” Once he has a melody figured out, the two work on what Nick calls a “jibberish track.” “Usually it’s just the acoustic and TJ playing the melody straight through but instead of lyrics it’s typically just ‘Oohs and Ahs’ to get a feel for the track,” he said. “Then I’ll take the track and add bass or drums or beat box and then TJ will come back to it to add lyrics. That’s kind of our formula for a track.”

The pair are getting ready to release their full-length, Oblivion; 13-tracks of emotive and varied acoustic/vocal-driven songs. While remaining true to the tracks themselves (the two “still play and practice the tracks often to get them to pristine”) the pair did focus on one aspect more so than any other when putting the album together. “We really wanted to give the listener diverse tracks,” said TJ. “We wanted the tracks to be varied from one to the next to make the listener anticipate the next track.” “And by that it’s something very different than just two guys playing guitar,” Nick added.

Take the opening track “Hic Up” with acoustic melody over looped beat box and deep lyrical matter about recovering from an abusive relationship. “2 Eyes” features dirge backing organ and dour acoustic picking that borders on Spanish guitar at the intro. TJ’s upper range vocal delivery rounds out this mid-tempo track of layered soundscapes. Title track “Oblivion” again adds a Latin flare to the melody via the acoustic while the lighthearted ethos of “Rattus” features bass-driven melody with overlapping guitar and effects-laden vocals at the chorus. This one is rife with groove and swagger. “Best Friends” is a straightforward balladesque strum and pick tune that gives to vocal-forward rocker at the chorus work.

Anxiously awaiting the hard release of Oblivion has the guys perfecting the tracks for live performances and living in the minute. When asked about what lies ahead, their staunch pragmatism coves to the surface: “We’re gigging a little here but mainly we’re trying to go about this from a different approach,” Nick said in conclusion. “All of those things are obviously in our sights (label shopping, touring) but we’re really just focused on the album, doing things like this, working with people in the industry before we get too far ahead.”

Tight musicality and their work ethic is what shines through on the 13-tracks of the album. If thinkingman’s lyrics, crystal clean instrumentation and a varied approach to songwriting are your thing, check out 2 The Nines–they meet your criteria.