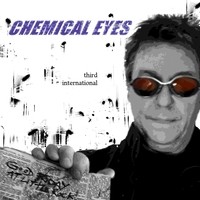 I had the pleasure of reviewing Third International’s ‘Entre Las Americas’ back in May for Skope (http://skopemag.com/index.php?s=Third+International) and I knew then that this group has got something special.   The mastermind behind it all, Andrew Pearson, is back with a single that includes two songs: “Chemical Eyes” and “Good Friday at Little Rock”.   This time around Andrew decided to record both tracks on his own while also handling all vocals and instruments.   The result is instant success because I feel Third International nailed it on all accounts!

Just as before on ‘Entre Las Americas’ the material is definitely socially & politically conscious except this time around Pearson really wants to open the floodgates of mass communication.   What I mean by that is simply for ALL people to not just complain about our problems anymore but actually “Get Up, Stand Up” and have a universal VOICE as ONE!   The first single is called “Chemical Eyes” that centers around global warming but really the theme is for each and every person to help by taking direct action toward improving and in the end saving this planet.   The song really adds a cool mix of sound and I have to say that vocally, lyrically and musically it made a BIG impact on me.   On the next song “Good Friday at Little Rock” you will pick up on some bluesy rock guitar riffs that truly add finesse to the whole picture.   This number was actually written as a poem in 1996, which won a New York Times award and was even published in a book of newly recognized American poets that same year!   This poem was called “Of Moonlight and Wishes” and now in song form it is “Good Friday at Little Rock”.   Andrew Pearson/Third International felt that the timing was perfect for this material to resurface for the good of all mankind.

Speaking in terms of Pearson’s poetic ability, I am highly impressed with how well the songs flow and sound.   It feels completely natural from beginning to end and that is exactly how Third International/Andrew Pearson intended it all along.   No BS, no lies; just real music with a message and a purpose.   But most importantly “Chemical Eyes” and “Good Friday at Little Rock” are meant for YOU to be the VOICE.   Third International/Andrew Pearson is ready for change and I’m pretty sure not that fake Obama change that offers absolutely nothing to individuals.   Ready…set…GO!!!