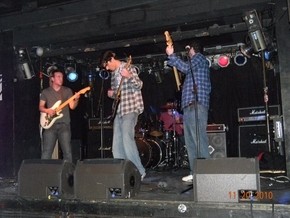 I must confess something to my loyal readers today. I took time out of my night on Sunday after Hurricane Irene to watch the MTV VMA’s. Now I have always respected MTV for how they break artists and set trends. But what I saw on Sunday was not really music, but more shock & awe. Do artists need to dress in drag and try to make out with Britney Spears to get attention?! On that note I will be thankful that I work for Skope & introduce some wholesome, and good spirited music from Blue Panel. Blue Panel are a band of four college students from Jersey that love to play music together. The boys just released their first EP ‘Feedback’ on I-Tunes and if you are looking for some good music without the ridiculous antics, give them a listen!

Stoli: Where are we talking from today and are you looking forward to the fall?

BP: First off, we’d like to thank you for taking your time to talk to us today! You’re talking to us in our hometown, Madison, NJ right now. As for the fall, we’re all going back to our respective colleges, so it isn’t all that exciting musically, since we can’t all play together. However, it can be beneficial because we have a chance to all develop new material on our own. Then, when we get back we have a ton of new stuff to work on.

Stoli: Being from New Jersey would you say you can relate with Jersey Shore & Real Housewives of New Jersey?

BP: No, not at all. We’re from a whole different New Jersey than the one portrayed on those shows.

Stoli: How does your name, Blue Panel, define your band & sound?

BP: It’s all about the uniqueness. Our sound is a unique blend of all our different personalities and influences, and we feel the uniqueness of our name personifies that very nicely.

Stoli: I am listening to your ‘Feedback’ now. Where did you write & record the tracks and where did the ‘Feedback’ title come from?

BP: As for writing the songs, Nick would usually come up with the first main idea and some of the foundations. Then as we were jamming, we’d flesh it out until it became a full-fledged song. “Feedback” was recorded at 7th Wave Studios in Morristown, NJ. Larry Kucher, the owner, is a good friend of Andrew’s and he does an excellent job! (shameless plug) The title of the album comes from Nick’s occasional problem with feedback from his equipment. Also, since it was our first release as a full band, we were looking to get feedback from this EP. Thus, the “Feedback EP” was chosen as the name.

Stoli: Are the four of you friends or is this a musical marriage?

BP: We all went to high school together, and Nick, Matt and Eli played in bands together throughout. We are all good friends, but we probably wouldn’t have been this close if it weren’t for the music.

Stoli: You all write the music & lyrics on this EP. How do you manage 4 different opinions & decide on the best option?

BP: Actually, mainly Nick writes the lyrics (with Andrew co-writing some of the time), while the rest of the band contributes their respective parts. We often write the songs in pairs, and then collaborate to fill out the rest of the music.

Stoli: I really like the song “Quid Pro Quo.” Who wrote that song and what is it about?

BP: “Quid” started out as an instrumental jam that we used to play at shows. When we decided to record it, Nick came up with the lyrics five minutes before he went into the booth. The lyrics are loosely about running into the person you used to be in a relationship with and all that kind of stuff.

Stoli: Who are some indie, non-mainstream bands that you guys respect & listen to?

BP: Rubblebucket, Hugo, the White Buffalo, among others.

Stoli: Do you think that Bon Jovi & Bruce Springsteen would have made it huge had they came out in todays digital age of music & social media?

BP: Yeah, definitely, because they both are excellent songwriters and have great work ethics. I’m sure they could have tailored their sounds to any era and would have made it big.

Stoli: You guys are still young. Do you have jobs or do you go to school while you climb the ladder to music stardom?

BP: We all go to schools all over the east coast and work jobs during the summer along with our music. It makes it harder for sure, but you have to have a plan B in case music doesn’t go the way you want it to.

Stoli: What venues have you played live in your area and what is a Blue Panel live show like?

BP: We’ve played most of the top venues in the tri-state area, such as Starland Ballroom, the Studio at Webster Hall, Sullivan Hall, Arlene’s Grocery, The Stone Pony, and other great venues. A Blue Panel show is all about great music and energy, which, in our opinion, is what a show should be all about.

Stoli: Will you be rooting for NY Jets or Giants or do you not care for the NFL?

BP: Even though we live in basically the same town as the Jets’ brand new training facility, only Nick is a Jets fan. Matt is a big Dolphins fan, Andrew is a lifelong fan of the “Dream Team” Philadelphia Eagles, and Eli isn’t a big football fan, but he follows cricket very closely.

Stoli: What is coming up for Blue Panel and where you at online?

BP: Well, next we are going back to school, but we will be playing together in the winter and next summer! To find us online, just go to facebook.com/bluepanel, youtube.com/bluepanelmusic or download the “Feedback EP” on iTunes! Thanks again for the interview, and be sure to keep an eye on us!