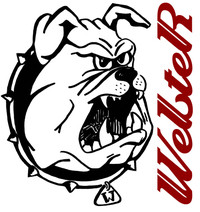 First things first, the guys from Welter love their guitars as evident in their debut full-length The Bush Years. The angsty-alt trio from Philly have been compared to Green Day Jawbreaker and The Replacements and while there are different elements at work here make no mistake, this is all about guitar, guitar and more guitar with amps cranked to 11.

The album opens to “For The Distance” and sets the garagey pace and sounds like it could have fit nicely in a Strokes album. The staccato electric chug serves as the track foundation with intermittent twin guitar interplay. The midpoint solo soars and is reminiscent of Paul Westerberg. This one is a straightforward rock tune with no frills. “Son of Captain Obvious” is a bit removed from the guitar-driven ethos of the album. Jeremy Saul’s vocals stand at the foreground, channeling Billie Joe Armstrong in what sounds like a ubiquitous Green Day rocker. The clever lyrics shine here. “Let Me Ride” again returns to the heavy fuzz guitar and is reminiscent of Deep Purple’s “Smoke On the Water” only in a punk vein. Angsty lyrics build all the way through to an angsty screamfest exit. “Day Is Done” opens to melody and for the most part commits to it, slightly eschewing their trademark guitar chug, though only slightly as it makes appearances intermittently through the track.

Again, Welter loves their guitars and to fully enjoy their debut, you’d better too. There are many musical influences at work here, some nuanced within the tracks, some worn all out on their sleeves. I couldn’t get one particular vein to which I would classify the album. Guitar-driven indie? Check. Post-punk guitar grind? Yep. Heavy alt? That’s there too. All around a respectable first outing for the Welter guys, perhaps a bit non-cohesive in its wide spray of sounds and influences, but respectable nonetheless.